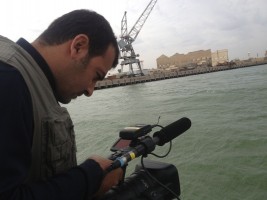 We learn with great sadness of the death of Yasser Faisal Al-Joumaily, an Iraqi cameraman killed in Syria. The Islamic State in Iraq and in the East would have kidnapped him on December 4, 2013, on route to Idlib. He would have been executed some minutes later.
With him, we made several movies about Iraq, including some for Arte reportage and Al-Jazeera. Yasser was Feurat Alani’s close friend.

Our thoughts are with his children and his wife.

A support has been established to help Yasser’s family.